Feline inappropriate elimination, also known as “missing the litter box,” is no joking matter. It accounts for about half of all reported feline behavior problems, and is the reason owners give most often when they turn their cat in to an animal shelter.

According to Dr. Nicholas Dodman, a professor at Tufts University’s Cummings School of Veterinary Medicine and founder of the Tufts Animal Behavior Clinic, it is estimated about four percent of cats “miss the box” (urinate outside it) on a weekly basis. These kitties are four times more likely to be dropped off at a shelter.

The more often a cat misses the box, the greater the likelihood he will be relinquished. Cats who eliminate outside the litter box on a daily basis – estimated to be about one percent of the feline pet population – are 28 times more likely to lose their home and family.

Ten to 24 percent of cats will have an inappropriate elimination problem at some point in their lives.

Cats relieve themselves outside the box for a number of reasons, some having to do with natural feline tendencies, and others having to do with their environment. Often there are both natural and situational factors underlying a problem with inappropriate elimination.

The three main causes for feline inappropriate elimination are:

If your cat suddenly forgets her manners and starts either peeing or pooping outside the litter box – especially if she starts using the bathtub or a sink instead — the first thing I recommend is a visit to the veterinarian.

There are a number of medical conditions that can contribute to inappropriate elimination, including feline lower urinary tract disease, urinary tract infection, cystitis, obstruction of the urethra, diabetes, cognitive dysfunction, and hyperthyroidism.

Diagnosing and treating an underlying medical condition is extremely important to your pet’s health and to resolving inappropriate elimination behavior. Your vet will perform a physical exam and order a complete blood count, a blood chemistry profile, a urinalysis, and check the thyroid if your cat is older. If the problem involves pooping outside the box, a fecal sample will be taken.

If your cat gets a clean bill of health from the vet but is a senior or geriatric kitty, it’s possible the aging process is causing changes in her elimination habits. For example, does she have to climb stairs to get to the litter box? Is the box easy for her to get into and out of, given her aging frame, joints and muscles?

It can be challenging to determine if a cat is uncomfortable or in pain. If your older cat is otherwise healthy but could be experiencing joint pain, make sure you’re doing all you can to make it easy for her to use her litter box.

Urine marking can be hormonally driven, but it is most often the result of a natural system of feline communication, or stress. Examples of common kitty stressors include:

Both male and female cats spray, as do both neutered and intact cats. However, neutered cats spray less, and neutering can reduce or eliminate spraying in some cases.

Kitties who urine mark generally use the litter box normally, but also perform marking behaviors. Some cats do both house soiling and urine marking.

It’s easy to tell the difference between the two once you know what to look for.

Urine marking, when it takes the form of spraying, happens on vertical surfaces. But some cats urine mark on horizontal surfaces, which can make it more difficult to determine whether you have a marking problem or a house soiling problem.

Where your cat marks is of primary significance. Generally speaking:

Other places cats are known to urine mark are on shopping bags just coming into the house, heating registers, and household appliances.

If you have more than one cat and don’t know who is marking, you’ll need to separate them to discover the culprit.

Resolving urine marking involves identifying and addressing the source of your kitty’s stress. When did the marking begin, and what was happening in your cat’s environment at that time?

Just as cats favor certain scratching surfaces, they also return to the same spot to urine mark. You’ll need to use an enzyme-based product for clean ups to remove stains and odor.

You might also want to spray a synthetic pheromone called Feliway on kitty’s favorite marking spots. Cats also “mark” by rubbing their cheeks against objects (for example, the top of their owner’s head), and Feliway may encourage your cat to mark with his cheeks instead of his urine.

Cases of urine marking are the most difficult to manage, as often the root cause, if determined, can’t be resolved completely. And sometimes despite addressing all possibilities, cats still mark.

I have clients who have tried homeopathics, Chinese herbs, calming nutraceuticals, acupuncture, essential oils, flower remedies, energy work, changed their furniture, changed homes, changed cat to cat interactions (kept cats separate from one another), used animal communicators, purchased outdoor enclosures like the one pictured below, and used several of the drugs recommended to help with marking, and the cat still marked. 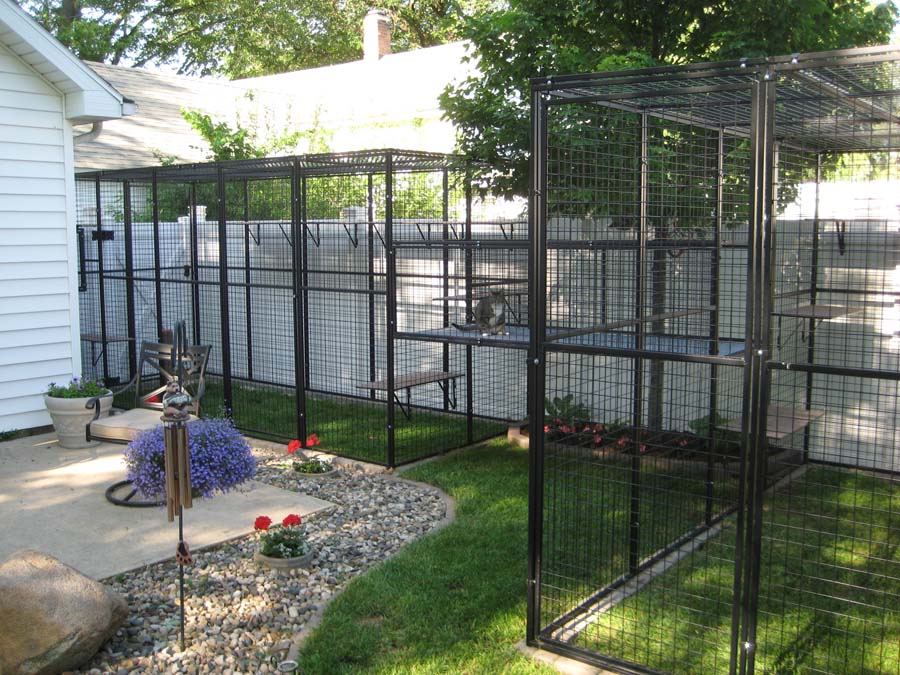 Cats who are happy with their bathrooms behave more or less like this:

Cats who are developing a litter box aversion may approach it tentatively. They may balance on the side of the box or put only two feet in. They may actually use the litter, but immediately leap from the box when finished. Worst case they may walk to the box, sniff at it, turn, walk away … and eliminate in an alternate location.

Pooping outside the box, but very close to the box, is almost always a litter box aversion problem.

Your cat can decide she doesn’t like her litter box for any number of reasons. Perhaps it isn’t being cleaned frequently, or not frequently enough for her comfort. Maybe she’s sensitive to a chemical used to clean the box, or perhaps she’s not fond of a box with a hood.

The box may be in a noisy or high traffic location, or where another pet in the household can trap kitty in there.

If you have multiple cats, you may need to add more boxes. The general guideline is one box per cat, and one extra.

It could be kitty doesn’t like the type of litter in the box, or it’s not deep enough (four inches is recommended). You can discover your pet’s litter preference by buying the smallest amount available of several kinds of litter, and several inexpensive litter boxes. Place the boxes with different litters side by side and see which box gets used most often.

Once you’ve discovered your cat’s litter preference, donate the remaining litter and extra boxes to your local shelter or cat rescue organization.

Find locations for litter boxes that are somewhat out of the way, and away from noisy household machinery and appliances. Choose warm locations in the house rather than the basement or garage. And make sure boxes aren’t close to kitty’s food or water bowls.

Boxes should be kept scrupulously clean. They should be scooped at least once a day and more often if you’re dealing with a potential litter box aversion situation. Dump all the used litter every two to four weeks (I recommend every two weeks, minimum), sanitize the box with soap and warm water, dry thoroughly and add fresh litter.

Plastic litter boxes should be replaced every year or two.

To review, litter box aversion can usually be resolved by:

The Pet Planet Magazine® has been bringing readers a first class pet resource publication for 10-years in print, now we have moved completely to a web based platform in order to keep up with the forever changing ways we share information, all while helping the environment by “going green.” Also check out our New Pet Planet Magazine Business Directory. You can post your Free listing today to get another source of traffic to your website, and generate more business for your company. [button color="green" link="http://petplanetmagazine.com/businessdirectory/"]Check Out The Directory Here[/button]